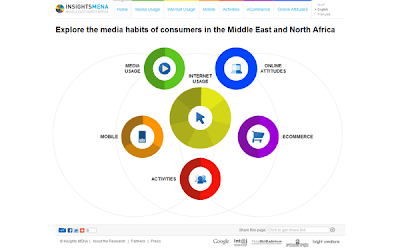 Internet and the digital world have become an integral part of daily life for a large number of people across the globe. For many, a considerable amount of time daily spends on the web. The digital world is also making strong inroads in the commercial space. According to a survey conducted by “Neilson”, 875 million individuals have purchased online, at least once a year. According to “world internet statistics”, as on 2011, Middle East constitutes only 3.4 percentages of the global users and hence does not contribute much on the e-commerce front. (If North African countries be included, the percentage will go a bit higher). Even though it does not play a very big role so far, e-commerce seems to have a great potential in the near future. The future growth could be fuelled by-high economic growth, young demographics, investments in the ICT infrastructure and political transition. Keeping this in mind, “Management Guru Blog”, will do a comprehensive analysis of the overall e-commerce industry in the MENA region. The entire report will be produced in a series, delving into the various aspects of e-commerce in the region. The very first in the series, will a give a brief description of the internet consumption as well as e-commerce activities in the region. 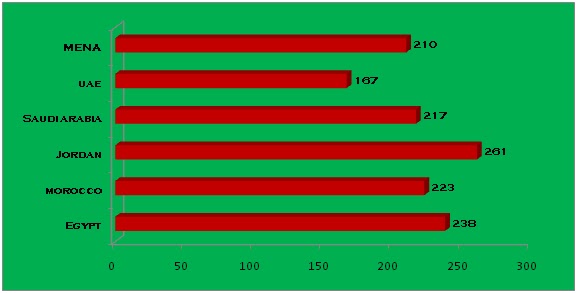 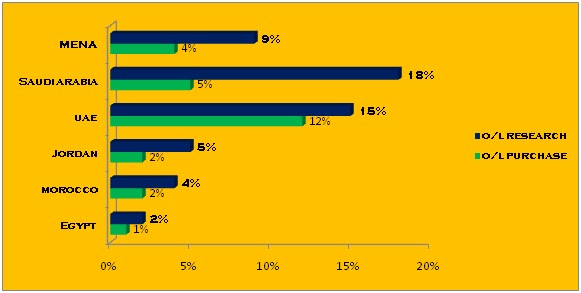 Fig 2: shows the percentages of online research and purchases made, across the overall population (includes internet users as well as non users), for MENA region and some selected economies. Source: Insights MENA. 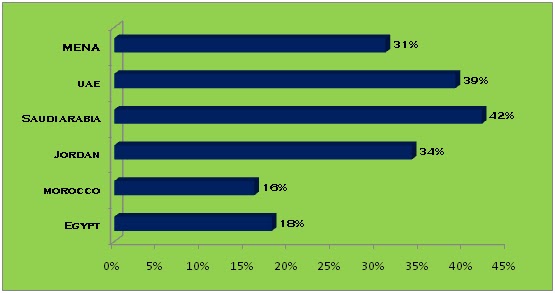 Fig 3: shows the percentage of internet users, who always pay attention to online ads while surfing the web, for MENA as well as other individual economies. Source: MENA Insights.

Table 3: shows the average weekly frequency, of some selected online activities, for internet users of MENA region and some individual economies of the region. Source: Insights MENA

Some of the key findings of the statistics are as follows:

·         Unique case of Saudi Arabia: Saudi Arabia, the largest MENA economy, enjoys a comparatively high internet penetration and internet enabled mobile usage of, 41 and 54, percentages respectively. It has a very high online research percentage of 18 and  42 percentages of internet users claim to always pay attention to online advertisements. In spite of having strong arsenals, the overall percentages of e-commerce stands at moderate five percentages, just one percentage point higher than the overall MENA average of four. It seems, cash based culture and low reliance on credit cards, coupled with under performance in the 45 plus segment, has deterred Saudi Arabia from realizing its full e-commerce potential.

·         Jordan has huge e-commerce potential: Jordan offers another good case to study. Unlike gulf countries, it does not have any natural oil resources of its own and according to “World Bank” is considered as a developing nation with moderate per capita GNI of US $ 5,790. But, the tiny Levant state is also among one of the most innovative Middle Eastern countries and in the recent years have taken strides in the areas of, innovation and technology adoption. It enjoys decent; internet penetration, average weekly internet consumption and outlook towards e-commerce. A close look to some of the online activities of an average Jordanian internet user provides lot of interesting insights. An average user clicks an online ad, some 5.93 times a week and spends considerable time in research also. But when it comes to buying a product online, seems he hardly engages himself.  It might be due to the same factors preventing other countries as well- cash based culture, low credit card penetration and apprehension of using the internet for making payments. Jordan can be considered as one of the huge potential market for e-commerce in the region. With higher credit card/debit card penetration and education campaigns, higher e-commerce percentages could be realized in near future.
Posted by Management Guru at 12:11 PM 4 comments: Links to this post 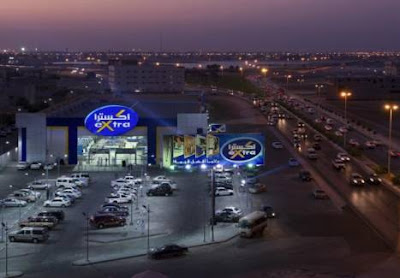 Retail industry is the part of the economy, involved in selling finished products to the end users. Retail shops could be found in wide range of formats, ranging from large hyper markets and department stores, to small convenience stores and general stores. It primarily includes six sub categories: - food & general retail, fashion apparels, fast food restaurants, fast manufacturing consumer goods (fmcg), luxury products and electronic appliances & consumer durables.
All across the globe, both in the developed as well as developing world, retail industry plays a pivotal role in the national economies. It has a wide range of direct as well as indirect economic significance- ranging from mass level employment generation (both urban and rural) to bringing, speed and efficiency into the entire supply chain system.
The given report intents, comparing retail sectors Malaysia and Saudi Arabia; one an emerging economy and a constitutional monarchy from South East Asia and other an oil rich Islamic Monarchy from the Gulf. Both the nation, share similarities across various socio-cultural as well as demographic parameter. Hence provide a good case to do comparative analysis. They will be compared across following parameters- economics, retail industry outlook, policy frame work, tourism, demographics and transportation.
Economics, demographics & infrastructure
The following part compares Malaysia and Saudi Arabia, across few of the general economic, demographic and infra structure related parameters. 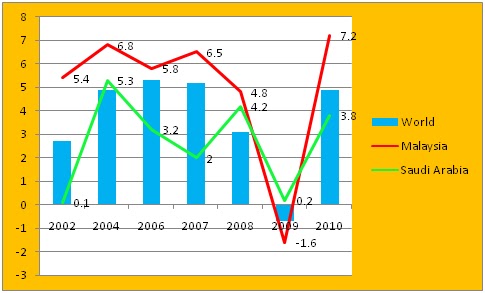 Table 2: compares Malaysia and Saudi Arabia across parameters related to infrastructure. Source: World Bank.
Retail industry outlook
Malaysia
Malaysia, an upper middle income country according to World Bank, enjoys a robust and growing retail sectors. According to Business Monitor International, total retail sales in Malaysia were estimated at US $ 33 billion, in 2009.  Like other Asian countries it has penchant for gigantic malls and hypermarkets and is dominated by players such as Giant (domestic), Tesco (UK) and Care four (France). The retail sector in Malaysia is fueled by large proportion urbanized middle class (50% of the population) with high disposable income; a large proportion of youth (42% aged between 10 and 34, as on 2008) and high tourist arrival. Tourism accounts for 30% of retail consumption in Malaysia.  (RECON, 2008) 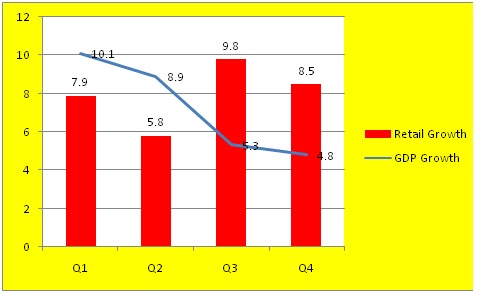 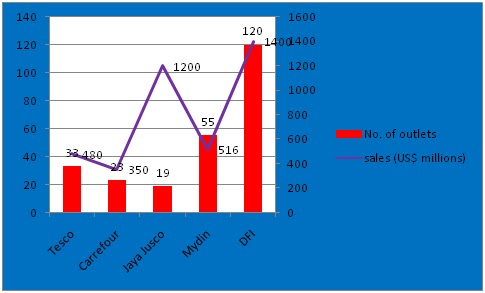 Fig 3: shows the number of outlet and total sales for major retailer in Malaysia for 2009. Source: Malaysia retail annual report, USDA Foreign Network.
Saudi Arabia
Saudi Arabia is the biggest Gulf country and the biggest economy in the Middle East and North Africa region (MENA) region. The region is marked by growth in retail space, young demographics, high tourist arrival and change of role of women in social sphere. Saudi Arabia, the biggest and one of the freest economies in the region, is considered as one of the most fertile market for the retail industry. Rapidly growing population, brand conscious young demographics (45 percentage of population aged 20-44) and high level of disposable income will be key drivers for the industry, in the kingdom. After oil, banking and telecom; retail is the fourth largest industry in the country, both in terms of number of, establishments as well as employees. It earned a total of US $ 55 billion, from retail sales in 2008, up from US $ 37 billion in 2004. (PR Log, 2009) The market is dominated by small retail stores, though big retailers, both domestic and international players, are trying to up their ante in the much fragmented retail industry. 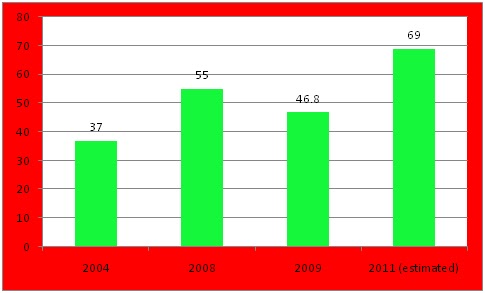 Fig 4: shows the retail sales of Saudi Arabia, in billion US $, over the last few years. Source: AMEinfo.com 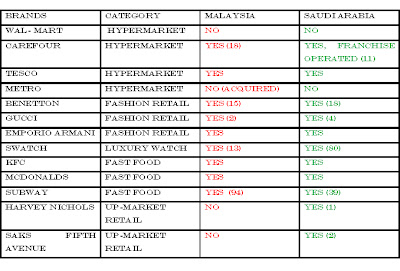 Table 4: shows the presence of some of the major retail brands in Malaysia and Saudi Arabia. Source: Mystore411.com and others

Policy
One of the key pillars for the growth of any industry in a country is policy and regulatory framework. An open and market oriented policy framework are more likely to stimulate growth and development in the long run. The following part of the report will compare Malaysia and Saudi Arabia across general business environment as well as policy framework pertaining to retail industry.
Retail business environment
General business environment
Saudi Arabian economy is marked by liberal economic policies and free market mechanisms stimulating foreign investments. The kingdom has biggest oil reserve outside Soviet Union and USA and like other Gulf counterparts, aim at diversifying its economy into industrial and service sector. The state generally does not interfere with the inflow and outflow of capital. It incentivizes businesses by providing favorable tax exempts, subsidies, provision of land at low price, exemption of custom duties on export etc.  (Al A, 2007)
In line with Saudi Arabia, Malaysian economy is also marked with investor friendly business environment. During 1970s, when Malaysian economy was primarily based on mining and agriculture, govt. took diversification measures backed with centralized planning. During 70s to 90s, like other Asian Tigers, Malaysia recorded a strong economic growth. In the present time also govt. plays a pivotal role in the economy, but gradually it is reducing. One of the remarkable features of Malaysia economy is availability of easy credits. 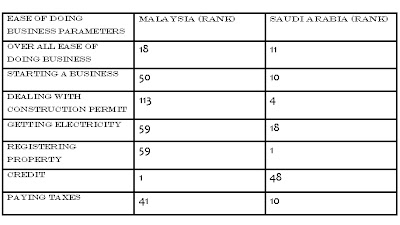 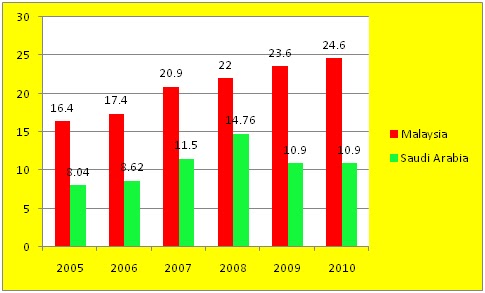 Fig 5: compares the annual inflow of foreign tourists in millions, for Malaysia and Saudi Arabia. Source: Tourism Malaysia and Indexmundi.

Demographics
Demographic profile is one of the key drivers of the retail industry worldwide. A young, vibrant and well aware population ensures high spending on retail.

Table 5: compares Malaysia and Saudi Arabia across demographic parameters. Data are for the year 2010. Source:  CIA World Fact book.
Transportation
A good transportation network, especially high volume of private motor vehicles, ensures the growth and development of out of town hyper markets. In the absence of motor vehicle people tend to visit nearby retail stores only.
A well developed transport and logistics network does not only help in sales but also ensures better functioning of big hyper market chains. In the absence of good logistic, big hypermarket chains are unlikely to import and circulate retail items in large volume, effectively.

The report has compared Malaysia and Saudi Arabia across various parameters- economics, retail industry outlook, policy frame work, tourism, demographics and transportation. As discussed earlier, both the nations offer a great case to study. They have their own share of agreements as well as disagreements. Some of the key conclusions drawn are as follows:
·         In both the countries, retail sector is important constituent of the national GDP and is witnessing high annual growth. The high growth of the retail sector is fuelled by higher disposable income, high percentages of youth and vibrant tourism sectors.
·         Malaysia is considered as a high middle income country, where as Saudi Arabia, on account of high oil and natural gas reserve, is one of the rich nations in the world. Marked with high per capita income, it is a more fertile ground for luxury retail.
·         Both are luring big retail brands to operate in their country. Saudi Arabia is a better destination than Malaysia in terms of a number of ease of doing business parameters such as – dealing with construction permit, getting electricity, registering property, taxation etc. Malaysia’s strength lies in the easy credits and high FDI in retail; 70 % against, 49 % in Saudi Arabia
·         Malaysia has better infrastructure, logistic as well as telecommunication infrastructure, both considered as a backbone for developing a vibrant retail sector. Saudi Arabian strength lies in availability of gasoline at dirt cheap price and high availability of electricity.
Reference
1>    RECON, 2008, Malaysia: a gateway to South East Asia,
2>    Al Amri, 2007, doing business in Saudi Arabia, available at < http://www.alamri.com/DOING%20BUSINESS%20IN%20SAUDI%20ARABIA.pdf>
3>    Doing Business, 2011, home page, available at http://www.doingbusiness.org/rankings
4>    MDTCC, 2011, Guide lines for foreign participation in the distributive trade, available at < http://www.kpdnkk.gov.my/kpdnkk-theme/images/pdf/WRT_Guideline.pdf>
5>    Masterintelligence.com, 2011, Master card worldwide consumer confidence index, available at < http://www.masterintelligence.com/ViewRegionReport.jsp?hidReportTypeId=2&hidRegionId=1&hidUserId=null>
Posted by Management Guru at 4:13 AM 24 comments: Links to this post