Egypt VS Turkey: as tourist destinations 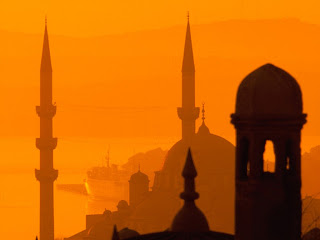 In the following blog the author will attempt  doing a comparative analysis of the two biggest tourist destinations from the Mediterranean region, Egypt and Turkey, with the help of qualitative as well as quantitative frameworks. Both Egypt and Turkey are world famous tourist destinations sharing lot of similarities across religious, cultural social and economical parameters.
Profiles as tourist destination
Egypt: Egypt, also known as the cradle of civilization has a very strong and vibrant tourism industry, employing 12% of the work force and receiving around 125 Million tourists every year (Dinar Standard, 2011). It has a wide range of tourist avenues such as Pyramids, Sphinx and other magnificent monuments; exotic desserts, wild life parks and sea beaches; shopping complexes and other life style centers and state of the art golf courses; providing a wide range of activities such as sight seeing, dessert safaris, golf tourism, cultural tourism, sea activities, cruising, adventure sports etc. (Egypt. travel, 2011)
Turkey: Turkey also has a  very rich history and cultural heritage and is  melting pot of various civilizations such as European, Arabic and Central Asian. Like Egypt it also has a wide range of tourist avenues such as; beautiful cities like Istanbul, Antalya, Ankara etc; rugged landscapes, serene and calm sea beaches and coastlines, full of exotic floras and faunas; plethora of heritage sites, museums, monuments and archeological sites etc. The range of activities at Turkey includes site seeing, adventure sports, winter sports, golf, rafting, eco tourism, yachting, night life, cultural tourism, shopping, Turkish bath, cuisines, conventions, wild life adventures etc. (tourismturkey. org, 2011)

Following table  shows the demographic and economic Indicators for 2010 (Euromonitor, 2011): 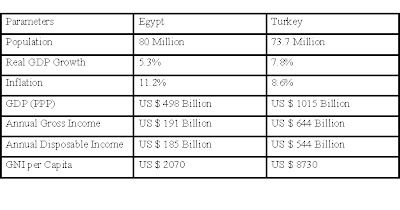 The following figure compares the GDP growth rate of both, and , # 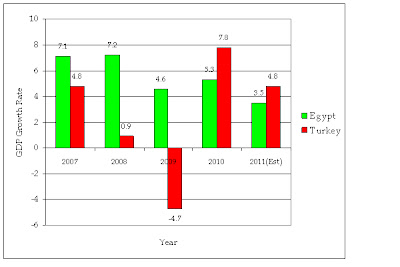 Social Indicators of and (Source: UNICEF)

comparison of Egypt and Turkey on some selected social parameters 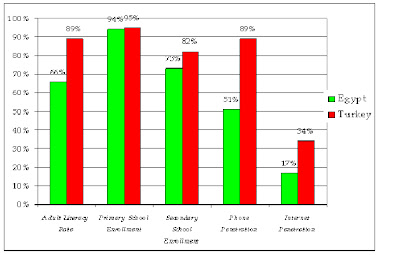 Tourism industry in Egypt and Turkey

Since ancient time Egypt has been a very popular tourist destination, attracting large number of tourists from Europe, Middle East and Africa. In 19th century after Napoleon's invasion,  people once again got interested in Egypt. The new era of tourism in Egypt began in 1989-90, when many of the leading hotels were privatized, airline sector was liberalized and the Egyptian govt. came up with some strong marketing campaigns. Since then the industry has been moving with an accelerating pace, occasionally hit hard by terrorism and political unrest. Last year out of the 125 Million tourists it had received, Russia with 14 % had the highest share, followed by United Kingdom, Germany and Italy. Though presently due to the political unrest the tourism industry had been affected, but in the long run it is expected to grow further, owing to expected political stability and transparency as well as more inflow of tourists from emerging economies like China and India.

The following histogram shows the growth of tourism industry since 1989-90, for Egypt 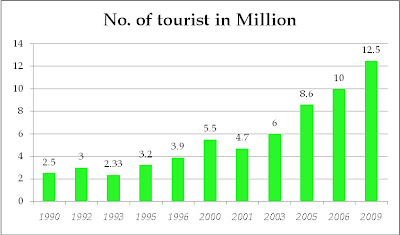 The following figure shows growth of annual revenue from tourism, over the period of   years, 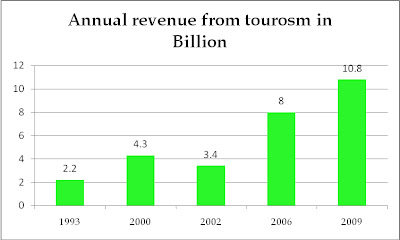 The following pie chart shows the percentage of 10 major countries, exporting tourist to Egypt, in the year 2007 (values given in 000s) 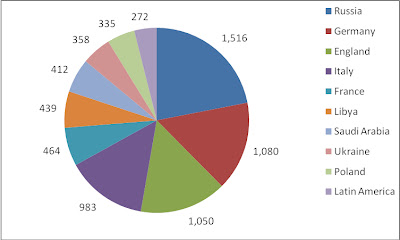 Source of data: (Information development support center)
Egypt is primarily known for cultural tourism. Having large number of Pharaonic, Roman, Coptic and Islamic monuments and archaeological sites, it’s a paradise for culture tourists coming from various parts of the globe. Though position of cultural tourism is unparalleled, Egypt had also made huge investments in developing various other forms of tourism such as, spa tourism, sports tourism, dessert safaris, beaches tourism, adventure tourism, eco tourism, convention tourism (business tourism) etc. In the recent years, government of Egypt along with the support of International Monetary Fund and other international organizations had made huge investments developing the tourism sector, a sector that constitutes 40 percent of Egypt’s non commodity export and employees more than 2 Million people directly or indirectly.;

Thanks to its, rich History, wide range of exotic landscapes, beautiful beaches and strategic position, tourism industry in Turkey had made noticeable growth in past few years, better than many of its European counterparts. Turkey’s tourism sector took a leap during the early 80s. In 1980, Turkey had mere 60, 000 beds and the tourism industry constituted just 0.8% of the GDP. (Mahmut Zortuk, 2009). Presently in 2009 with revenue of around US $ 21 Billion, constitutes 3.4% of the GDP and 20.8% of the export. According World Tourism Organization, Turkey is ranked 7th among the best tourists destinations in the world and holds 9th position in terms of annual revenue from tourism. (Sunday’s Zaman, 2011) Istanbul; the capital of two of the greatest civilizations in the world, Byzantine and Ottoman civilizations; along with Antalya are the two important points focal point of Turkish tourism, comprising of 60% of the tourist intake . The city was the 3rd most visited city in Europe as on 2008, and was the cultural capital of Europe in 2010. (Invest in Turkey, 2009) 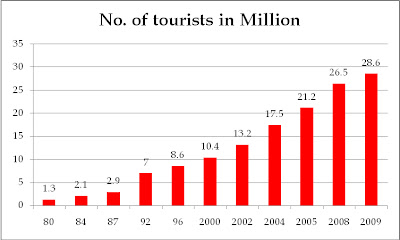 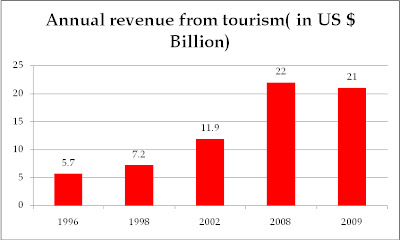 Source of data: Middle East and North Africa report, Istanbul Bulletin, Sunday Zaman, Country studies, Central daylight time
Over the coming years, tourism industry in Turkey is expected to grow further, with around 3.3 Million tourists in 2012. Around 40% of tourists come from, Russia, United Kingdom, Germany and Iran. Major tourist attraction in turkey includes, archaeological sites, monuments, museums, beautiful coastline with 314 beaches, rugged landscapes etc and major forms of tourism includes cultural tourism, winter tourism, beach tourism etc. Other alternative forms of tourism had been developed such as medical tourism, religious tourism and sports tourism. Turkey having 14 golf courses, 20 skies and 40 marinas as of 2008, had also been an emerging sports tourism destination. Similarly it is evolving as a medical tourism destination, with a large number of medical tourists coming from Middle East region.
Comparing Egypt and Turkey on a “Nine Point” Analytical frame work @
The success of a tourist destination depends on a wide range of factors ranging from places to visit, connectivity to political stability and infrastructure etc. In the following part of the blog, both the destinations will be judged on a set of nine parameters, with every parameter having a specific weight age score, depending on the importance of the parameter. Based on the competencies shown under individual parameters, they will be rated from 1 to 5, with 1 being very low to 5 being very high. Finally the individual scores will be multiplied with the weight age score and their sum total over all the nine parameters will be the final score for the individual states. 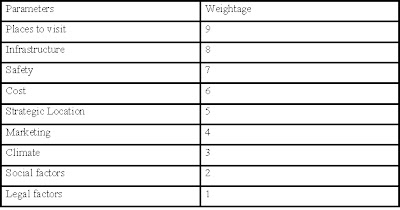 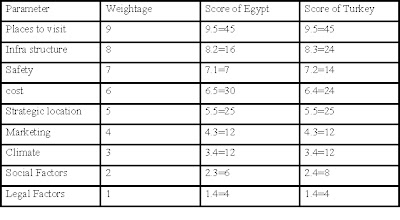 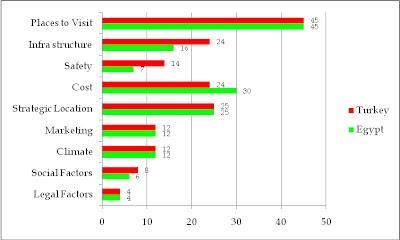 Though both Egypt and Turkey had emerged as great tourist destinations in the past few decades, with both having their unique selling proposition; one an ancient land with some of the most magnificent monuments and archaeological sites while other, a moderate and prosperous Islamic society also blessed with a rich cultural and historical heritage and catching up fast with its other developed counterparts, both in terms of outlook as well as approach. If data speaks something, then the comparison between Egypt and Turkey goes in favor of the later. Not only does Turkey has a bigger tourism industry than Egypt and has better figures under various social and economic indicators but also has 10 point higher score under the nine point analytical framework. The difference in the scores can be explained with the help of underlying difference in the structure of Turkey and Egypt. Both the nations do have their own share similarities, since both, are Moderate Islamic societies having very rich heritage, are making headways in the tourism industry by investing in various new and alternate forms of tourism and are moderately cost destinations providing a value based proposition to the tourists but along with this similarity there are some gross dissimilarities also. While Egypt had just started liberalizing its market, investing in social infra structure and post revolution is attempting a transition into a liberal and transparent democratic system; Turkey on account of its inclinations towards the European world had made huge strides in investing in social and physical infra structure, is a moderate, transparent and secular democracy and has implemented economic reforms much before. Turkey itself has huge ambitions of achieving 50 Million tourists by 2023 and is yet to achieve its full potential as a tourist destination, yet it can be an inspiration for the newly evolving Egypt. Turkey, a prosperous and modern society with strong Islamic roots can be a ‘great model state’ for a new Egypt.

The Turkish model can not only be beneficial for the tourism industry in Egypt, but can also be an inspiration for various parts of its, economic, social and political future.

@ This nine point frame work had been made with the help of a seminar session attended by the author at Sheffield Hallam University, Sheffield, United Kingdom. The seminar was attended by students from various countries across the globe such as, India, Germany, China, Pakistan, Oman, Libya, United Kingdom etc

Posted by Management Guru at 3:12 PM 76 comments: Links to this post