In the last blog, the author discussed about the short term loss on account of the Arabic Uprising. Though there have been losses of high magnitude, destabilizing individual economies for the time being, the uprising can bring a new change in the entire region, not only in socio -political sphere, but also in the economic one. The region, known for autocratic governments, corrupt bureaucratic machinery and lack of liberalization always struggled hard in achieving its full potential. The given uprising followed by regime change in many of the individual nations can help building a new Middle East, marked by transparency, efficiency and inclusive growth. The following blog will do a brief analysis of  the future prospects for Egypt, one of the largest Arab state and focal point of this uprising.
Egypt
Egypt had been the focal point of the latest Arab uprising. The protest, breaking out in January end, finally ended up with extirpating the Mubarak regime. Though facing the heat of high inflation and huge loss in tourism sector, one of its prime sectors, Egypt holds a strong future ahead, provided the much needed transition into a stable and transparent democracy happens as soon as possible.
Recent Situation #
Egypt is a US $ 188 Billion economy (nominal) with a population of 84 Million and a per capita income of US $ 2,450. In recent years, it had shown a decent growth in the range of 5-7% (fig 2), coupled with reform majors taken by the Mubarak regime; nevertheless 30% of population is living below the poverty line (Stuart Kauffman, 2011) with around 11.9% of the active population unemployed. In terms of various human development indicators, it had so far shown sub standard performance with a literacy rate of 66%, internet penetration of 21 % and had been ranked 101 out of 169 nations in the Human Development Index indicator (HDI). With a rank of 96 out of 179 nations in the “Economic Freedom Index”, it is considered as a less free economy. Tourism plays an important role in the economy, generating around US $ 10.8 Billion as revenue in 2009 and employing 12% of the work force. Another major source of revenue is oil and petroleum exports, (fig 3 gives a brief analysis of export items of Egypt in the year 2007) though Egypt is not considered among the major global petroleum exporters, yet valued at US $ 8 Billion, oil and petroleum exports constitutes around half of Egyptian exports. Other areas of foreign currencies are remittances from Egyptians living abroad and Suez Canal. (Dinarstandard, 2011) 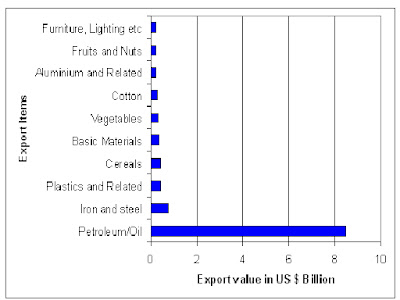 
Though Egypt had shown strong growth in the recent times (as shown by the figure as well), its economy has some major flaws, which are as follows (Isobel Coleman, 2011):

Analysis of Economic loss due to Arabic Uprising

fig 1: Arabic stock market (source: Arabianbusiness.com)
One of the biggest events which 2011 had witnessed so far is the Arab uprising. Fueled with the help of social media, this wide spread revolt, mainly by the youths attempts; uprooting authoritarian and ignorant incumbent regimes, promoting democratization of the over all political system and implementing more development and social welfare. Many of the political pundits are viewing this movement, which started in Tunisia and then spread vigorously across various parts of the Middle East, in line with famous reforms in the East Europe during 70’s. Though the latest Arab uprising will definitely have great positive impact on the Arab world in long term, but had also resulted in huge economic loss in the short term. The market capitalization for 16 Arab stock exchanges, valued at US $ 1002 Billion on January 25, went down to US $ 862 Billion by March 4, there by losing US $ 140 Billion. (Shane McGinley, 2011)
Last couple of years was quite de motivating for the Arab economies, on account of factors like  global economic slowdown followed by dip in oil prices and Dubai real estate crisis. But the market seemed to be bullish in the beginning of the year. The over all MENA (Middle East and North Africa) regions were expected to grow at 5.1% of GDP according to IMF and economic conditions seemed to be strong, owing to increase in oil prices. But the recent uprising can end up wiping of 2 percentage growth points.The uprising had following impact on various individual economies:
Tunisia
The uprising started in Tunisia during December, 2010, finally culminating into overthrowing president Ben Ali on January 14, 2011. The Economic loss of the revolt is estimated to be around, US $ 3.48 Billion (Mees.com, 2011). The Tunisian stock market, started in  1969 and enjoying a long period of growth since 2003, crashed , making the index fall by 12 percentage points during a week of turmoil. The stock market closed during the turmoil had finally re opened. Presently valued at US $ 13 Billion, with 56 firms being listed, the market is yet to get back to its original form. Though IMF is predicting long term gain for Tunisia on account of reforms and transparency expected from the new govt., the ferocity of short term losses due to burning up of factories during revolt, tourism hitting a low with a drop of 40% from January to February, canceling or halting of several real estate projects worth US $ 45 Billion etc; can not be discounted. (thenationals.ae, 2011)
Egypt:
Egypt had been badly hit by the revolt. It had been calculated by a French bank that at the height of revolution Egypt was loosing US $ 300 Million a day (Heather Murdock, 2011). Uprising, which happened during peak tourist season, ended up one Million tourists leaving Egypt, there by hitting hard a very important source of foreign currency. As an after effect of political turmoil; banks are conscious of lending and there had been a significant decline in credit growth; in the light of more govt. spending, the fiscal deficit of the govt. is expected to touch double digit; food supply had been affected in many areas, resulting in high price of food items; the Egyptian stock market was closed for five weeks, resulting in huge losses whose exact value is not known. The annual growth rate, expected to be 6% in the beginning of the year had been revised to 4%. (Dawn.com, 2011)
Libya:
Libya is another country, where wide spread protest is happening against the oppressive Gaddafi regime.  Situation in Libya is worsening day by day and most of the expatriate population has left the country. The food supply system had collapsed and food prices have sky rocketed. Libya, one of the biggest oil producers in Africa, exported 1.3 million barrel of oil a day, constituting around 2 % of global consumption, but after the crisis, with most of the foreign companies discontinuing their operations in Libya and many major customers imposing sanctions, it had come to a halt. The freezing of oil export will not only affect Libyan economy vehemently, but will also have negative impact on global oil prices. In contrast to Egypt and Tunisia, where the revolution served the purpose of regime change, in Libya the war between Gaddafi’s supporters and opponents are still on and Gaddafi and his supporters seem to be reluctant to give up very easily. This is making the situation worse.
·
Other Economic impact:
Other than economic wreckages felt in individual countries, there can be some wide spread economical impact, being felt across the region. Such as:
The given blog had analyzed the short term loss due to the uprising, nevertheless  in the long run the wide spread movement is expected to create huge economic gains on account of transparency in the over all system, efficient allocation of resources, better power to the common citizen  (besides mass level political and social reform). The next blog will try analyzing the long term economic gains from the uprising.
Reference:
1>   Shane M, 2011, Analysts say 2011 could be a lost year for Arab bourses, arabianbuisiness.com, available at http://www.arabianbusiness.com/analysts-say-2011-could-be-lost-year-for-arab-bourses-385503.html
2> Mees.com, 2011, Popular uprising rip through Middle East, available at
3> thenational.ae, 2011, Tunisia crisis, available at
4> Heather M, 2011, Egyptian economy: facing the unknown, voiceofamerica.com, available at
5> Dawn.com, 2011, worries about fallout of unrest on Egyptian economy, available at < http://www.dawn.com/2011/03/10/worries-about-fallout-of-unrest-on-egypts-economy.html>
6> Gospress.com, 2011, Crisis in Arab world can hurt airlines, available at < http://www.gospress.com/economy/crisis-in-the-arab-world-can-hurt-airlines.html >
7> yacout.info, 2011, unrest in Arab world caused Saudi market $ 54 Billion, available at < http://www.yacout.info/Unrest-in-Arab-World-Costs-Saudi-Market--54-Billion_a2641. html
Posted by Management Guru at 10:11 AM 1 comment: Links to this post 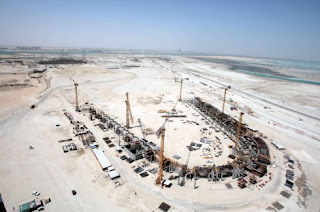 12> ConstructionWeekOnline.com, 2011, $563bn worth of construction projects in Abu Dhabi, available at http://www.constructionweekonline.com/article-11191-563bn-worth-of-construction-projects-in-abu-dhabi/
Posted by Management Guru at 6:50 AM 62 comments: Links to this post