India as a Brand :A mere rhetoric 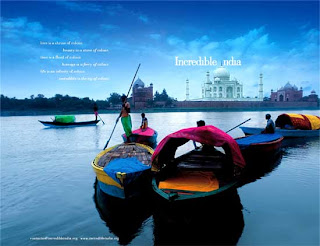 Couple of months back in my college there was an event organized that dealt with the idea of branding India, the main objective of the event was to focus strongly on the positive aspects of India so that we can attract more and more investment and human capital from all over the world. There were dignitaries from various part of the corporate world and basically every one believed that by reinforcing strongly on positive aspects of our culture ,our diversity and our booming IT industry and economy we can build a strong brand image of India.

Well before being judgmental in the beginning i will like to tell when it comes to the concept of BRANDS what does THEORETICAL WISDOM says .According to theory a brand is a name ,logo or the product of a company with which a customer relates himself and which distinguishes the company from the competition, this was just a theoretical definition ,but practically with out getting into much of global gases(a typical TAPMI TERMINOLOGY that means focusing more on abstraction with out giving much of concern for practicality ) a strong brand value means the strong loyalty a particular product enjoys on account of its supremacy over its competition as well as the value that it delivers to it's customer ,thus though a strong promotion strategy is really important for brand building, promotional strategy are just the circumference of the entire process, at the center of any successful brand lies the product it self ,today CATERPILLAR is a brand because it produces the best tractor ,VAN HUSEIN is a brand with which people feel connected because it makes the best cloth fabrics, MCDONALD is a brand because it prepares the best fast food, thus it is not the promotion but the product that constructs a brand .

Now lets come to the idea of India as a brand ,with the above given concept of brand it is well evident that the brand value of India as a nation depends primarily on the nation called india ,it's economic system ,it's political machinery,its economical parity ,it's efficiency in making things happen ,it's growth potential ,it's per ca pita income ,the vision of its policy makers,it's position in various social index factors such as human development index,gini index etc .Along with this too some extent it also depends on various other factors such culture heritage etc .Now having said this how strong is really India as a product, with 72% people still earning less than 2 dollar a day can we tell that India is an economic super power .With around a quarter of population living in abject poverty struggling hard to make it's end meet can we tell that India is a strong brand in it self, with a rank of 138 in human development index and a abysmal position of 145 in per ca pita income can we really tell that India has got the potential to herald itself as a very strong brand on the global platform .In a country where there is so much of social unrest from north east to Gujarat from Kashmir to the southern part of India is it possible that mere rhetoric of our culture and heritage will offset this harsh reality of violence and unrest and brand india as a epitome of harmony in diversity . With so much of corruption prevalent in all the ladders of bureaucracy , with such a slow pace of deregulation , is it really apt to claim that India is a great place to do business. There is so much hoopla regarding IT that some people even donot hesitate to proclaim that if china is the factory of global economy India is the laboratory ,i will like to tell such people that just tell me a single indigenous IT product that this lab has made , an operating system is a far off dream India could not have made a single web browser so far.

In marketing it is said that nothing kills a brand faster than a bad product it self, and given the kind of statistics given above modern india is indeed a bad product ,a product which is still going through the initial phases of it's product cycle .so rather than emphasizing on brand promotion of india on account of hand full of rhetoric like tradition or IT india first needs to work on the product quality itself ,it needs to implement a very comprehensive human development programs ,that must put emphasis on mass level education,sanitation, health facilities and education .it needs to invest hugely on its higher education system and must change the culture of this system from mere mugging of facts to research and practical application,it needs to curb rampant corruption as soon as possible. (details on this on some another blog), once the product will be of top quality strong branding will simply follow. Till then it will be nothing more than mere rhetoric.
Posted by Management Guru at 5:41 AM No comments: Links to this post

Use of social networking sites for evaluating candidates

This might look weird in first go but social networking sites like orkut and face book can be used as a wonderful tool for judging and analyzing potent candidates for senior positions .

Social sites like face book and orkut can give a hell lot of information regarding one's prospect candidates for senior positions .In social networking site like orkut there are options of joining various communities( since i am not a face book user till now i donot have much idea on this ),there are myriad communities available in orkut ranging from communities on fashion and life style to communities based on politics ,religion , business and others .Generally every individual has a tendency to join some communities of his taste where he can chat and share views with like minded people and also gather some valuable information .Now suppose a company wants to recruit for some senior position and it wants to judge its potential candidates on various parameters, though to make this happen it can rely on the candidate's past experience along with a thirty minute face to face interview ,though they may give some valuable insights regarding the professional behavior of the candidate but still it is n't sufficient in judging the overall personality of the candidate .When it comes to hire an employee for a senior position it is not just the professional behavior that matters but various other things like political inclination, hobbies ,interest are also important and cannot be discounted ,it is tough to evaluate these things just on account of a thirty minute face to face interview ,to know your candidates better interviewer can rely on social networking sites like orkut ,it can go to the interview's account on such sites and can see the various communities the he has joined.To join a community you need to first search that community, then you need to visit the required page,then there happens to be a join option where you need to click,immediately after this another message will appear asking you whether you really want to join this community or not and after replying in yes, finally one becomes the member of the required community .Thus though the entire process does not take more than 3 minutes but if in this fast moving world one cares for giving his 3 minutes then it surely means that he has got some inherent interest in that particular stuff with which the community deals with. Suppose if someone is the member of a community namely "NO MORE COMMUNISM " ,then it surely means that he has some sort of aversion for that communism , or if someone is a member of too many music related communities then then it can be guessed that this fellow is a music buff. Thus with the help of communities (along with some degree of deductive logic) a lot of things can be found out regarding your candidate.

Though this method is as effective in recruiting for lower ladders as for higher ladders but currently it is more practical in using it for high profile recruitment only, in low profile recruitment where recruitment is made in huge bulk and where specific skill set is required from the employee rather than a very diversified one this method will simply end up wasting a great deal of time with out giving much of desired results.

Though a very innovative and wonderful tool in itself it has got it's own flaws:-

2. Some times one might join a community not out of some sheer interest but just for some show off.

3. This method can be used as a wonderful supporting tool but too much of reliance on this might not be very effective.
rather than relying on it completely what interviewers can do is that they can get a rough sketch of their prospective candidates with the help of such tools and then based on this sketch a proper face to face interview can be taken to reaffirm the sketch .
Posted by Management Guru at 3:08 AM No comments: Links to this post