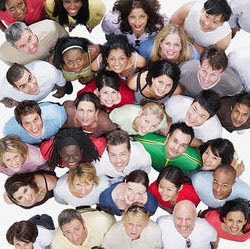 The rule of 250 is a wonderful networking cum selling strategy, it stipulates that while you are dealing with one customer you are in reality dealing with 250 potential customer because every individual on an average knows 250 such individuals whom he can influence to some extent, according to this rule if you have made strong relationship with one of your customer on account of your services as well as on account of personal grounds then this one customer has the potential to bring you 250 new customers with the help of his personal network.
The father of this rule is an US based auto salesman named JOE GIRARD,according to Wikipedia Joseph Samuel Gerard, better known as Joe Girard, (born November 1, 1928 in Detroit, Michigan) is an American salesman. He is recognized by the Guinness Book of World Records as the most successful salesman[citation needed], selling 13,001 cars at a Chevrolet dealership between 1963 and 1978.JOE has authored a book called "HOW TO $ELL ANYTHING TO ANYBODY" where he has described the rule of 250,according to him your one single customer is equivalent to 250 potential customers, Joe always believed in making very good relationship with his customers, he was in a practice of sending them cards(every month he used to send 13000 cards) and he generally used cards of different color and size for his customers so that customers should never think that this is a junk mail, this helped him in building strong relationship with his customers who in turn brought him loads of new customers. These new customers again has the potential of bringing 250 new customers, thus a whole new network of customers can be established.

The story behind finding this unique no. 250 is again very interesting, once what happened Joe went to a funeral ,there he was given a prayer card ,unlike other prayer card this card was having the photo of the deceased on the top, this prompt the sales man inside Joe to give a serious thought, he thought since the exact no. of mourners turning up for the funeral is not known how can someone decide how many cards to print, the no of cards shouldn't be very low but the same time it cannot be very high because that will lead to unnecessary wastage( this kind of card cannot be reused  since it was having the photo of the deceased ).After the funeral he went to the funeral director and asked him how did he decide the no of cards to be printed, the director replied that over the period of service he has noticed that for any kind of person generally 250 mourners turn up for his/her funeral. This led JOE to think that every individual is linked to some 250 individuals on whom he has some sort influence because until unless you will not be having some influence on some one  the  guy will not turn up for your funeral, from here the rule of 250 came into existence.